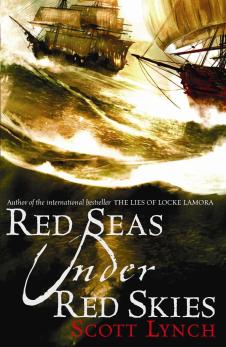 After I had finished reading The Lies Of Locke Lamora I dove straight into Red Seas Under Red Skies. I couldn’t put off adventuring with Locke and Jean despite other books to read and games to play. Scott Lynch seems to continue his rhythm from the first book, despite the story picking up two years after the conclusion of Lies.

The city of Camorr and the beginnings of the Gentlemen Bastards were explored in the first book. Red Seas Under Red Skies picks up in the city of Tal Verrar on the Sea of Brass, which was only mentioned in passing during the first book, and their capers in the city are already in full swing. The book follows a similar pattern to The Lies Of Locke Lamora, in which chapters alternate between present and the past. In this case the past chapters describe Locke and Jean’s arrival in Tal Verrar and pieces of their scheme.

The two esteemed thieves are executing their most daring, and thought to be impossible, heist yet by targeting the Sinspire, Tal Verrar’s most illustrious gambling house. The comparisons to Ocean’s Eleven are prominent here seeing as there is much ado about the casino’s vault and the ruthlessness of Requin, the Sinspire’s owner.

Despite being titled Red Seas Under Red Skies most of the beginning of the book doesn’t have much to do with ships. It isn’t until their plans end up disrupted and sent veering off course do they find themselves out on the open seas. Two inexperienced city thieves out on the sea ends up being quite the adventure, and only gets better once they really leap from the pan into the fire.

Overall Red Seas Under Red Skies starts off slow, with many of it’s “past” sequences falling flat until their significance is played upon much later in the story. Plus the camaraderie from the first book isn’t there until Locke and Jean are on the Sea of Brass, where many of the supporting characters are found aboard the various pirate ships.

One of Lynch’s strongest talents is in full swing here as his penchant for world building is present throughout. The setting isn’t just some backdrop thrown up so Locke and Jean can run (or sail, in this case) around during their adventures. Time and effort are expended in establishing a realistic feeling to a fantasy setting, with many details sprinkled throughout the narrative to tie it all together. It’s the sort of setting where I could read any story written by Lynch, even if it didn’t feature the titular Gentlemen Bastards, and would still enjoy it and it would feel comfortable and familiar.

Places are mentioned in passing that become focal points much later. In The Lies of Locke Lamora, Tal Verrar is mentioned in during discussions involving sailing and trade routes. In this story it becomes one of the central locations of the story, and given the same treatment as Camorr in establishing its role in the history and dynamics of Scott Lynch’s world. While Camorr is much more detailed, Tal Verrar isn’t just given a name and few quirks. The Verrari are unique in their distinction, not being “Camorri” people thrown into a city called something else. The people and culture of Tal Verrar feel different when you read about them, something many author’s haven’t got a knack for. Lynch has built this world and loves telling his stories in it, and it shows throughout.

Of course the story didn’t end the way I expected it to. I think that will be a pattern in the rest of the series but I don’t want it to become too common place. Otherwise Lynch may find himself subjected to similar views held during M. Night Shyamalan films. If you write a dramatic twist at the end of every story they begin to lose significance. It was brilliant in the Lies of Locke Lamora, and well done in the second. I am hoping it won’t continue in The Republic Of Thieves, which I am reading now, but if it does I can always hope he makes it a great one.

This site uses Akismet to reduce spam. Learn how your comment data is processed.